With the drop-ceiling gone, we can finally get into the attic. Our handyfriend Aaron came over to install a drop-down attic ladder in the kitchen ceiling. Since the ladder is made to be mounted to the joists in the attic, the stability of the ceiling itself isn’t important, and that’s good because several spots look like this: 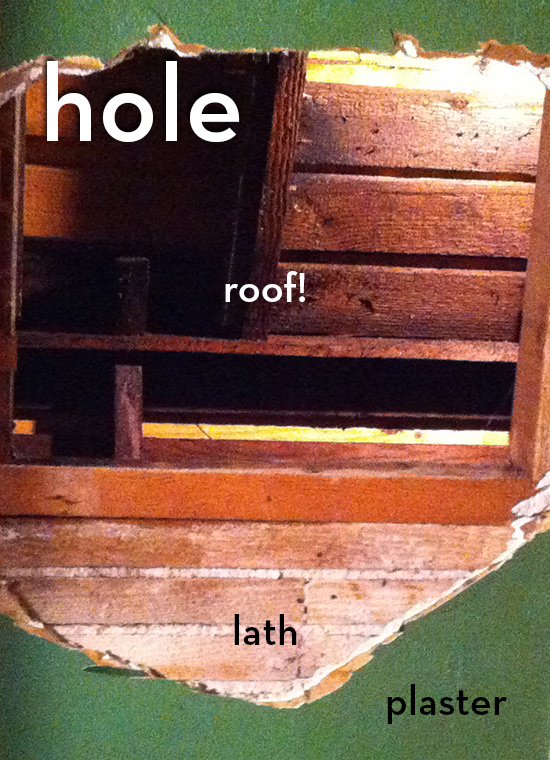 There is no way we could have installed the ladder ourselves, if for no other reason than I lack the upper body strength, so having an Aaron is great. I recommend it. He taped off an area around where he was working, essentially making a small plastic room within the larger kitchen. It didn’t stop the RAIN OF FILTH that came down from somehow getting all around the house (thanks a lot, you dirty cats!), but that’s okay because now we can get in the attic.

We took a short look around. We could see disconnected gas pipes that I believe once lit the house, new wiring and knob-and-tube wiring, something terrifying in the corner (I’ll get back to that), and a thick layer of dirt on every horizontal surface. Have I mentioned the attic is filthy? 100 years of roof dirt waiting just for us! It was serious, so I got out our Dharma Initiative jumpsuits from a few halloweens ago.

That’s my serious face. We climbed the ladder with masks, a shop vac, a lantern and a trash bag and got to work. Taking care to only stand on the floor joists, we picked up large debris by hand and vacuumed the dirt. The debris was lath, plaster, old lumber, a petrified lemon, and a marble! That’s all we found in the cubic yard we were able to clear. Who knows what awaits us in the next 1000 square feet! That area alone took over an hour, and boy was it hot up there. Turns out that’s where all the heat goes! It’s California, nothing’s insulated here.

So the thing. In the corner. It looks like a big (beach ball-sized) lump of spray foam insulation stuck to an outside wall, but it’s not insulation. Nope, it’s organic. You can only really stand up in the center of the attic where the peak of the roof is, so to get over to the lump you have to crawl low along a joist. I creeped over to get a look and got to about five feet from it and turned back when I could confirm that it was not, in fact, man-made. I tried to get a photo of the thing but failed. Then I called Randall in and he smote the giant, papery abandoned wasp nest with a broom. It was abandoned! Hooray!

My hero! His backside. Forgive the photo quality, it was very dark.

After that we both decided we’d had enough and closed up the attic until we had a reason to be there. My apologies to our future electricians.

Next… back to the kitchen.