Well, skim coating the walls only made the bubbles beneath the wallpapers more obvious. So I sanded and applied more mud. Rinse, repeat. Also patched a few holes we put in when we were crowbarring the ceiling and spackled ONE THOUSAND nail holes. It took a couple weeks of working here and there, but the walls are smoothish. They’ve got “character” for sure, but I think they look pretty nice. I’m not bad with a trowel and I think I might actually be able to install drywall if I needed to.

They’re ready for primer and paint. Now that we have SO MUCH wall space and the room seems big, I was thinking about painting the walls a soft light gray instead of white. Just to add some dimension. A desaturated sage or dove kind of color. I liked these so I gave them a shot: 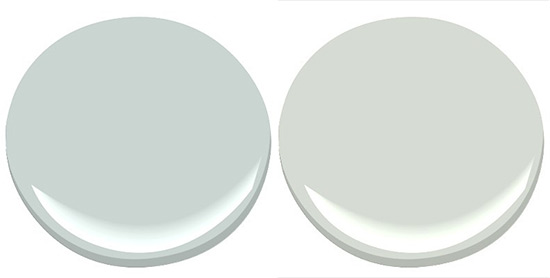 Naturally they don’t really look the same on the wall. The one on the top is too dark, but I like the one on the bottom. It looks like cloud vapor. 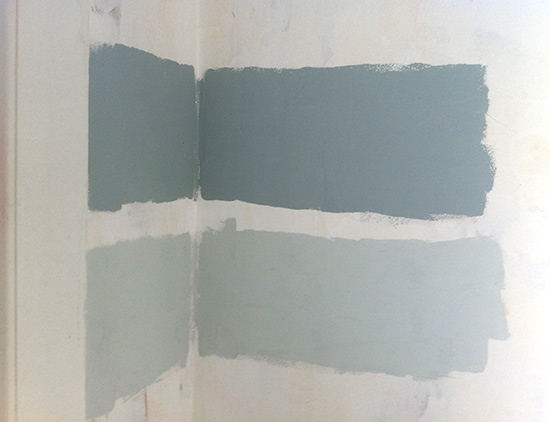 My only concern is the room looking too cold with the silver ceiling and white cabinets. But the counters are still wood, and I’d like to put in wood flooring too, so maybe it balances out. Maybe? What do you think?

Meanwhile. The plan for the kitchen ceiling is to cover the whole holey thing with plywood and nail up the (unpainted) tin ceiling tiles. Tin tiles were apparently created in America to mimic the look of fancy European plaster but they really took off in the late 1800s when lath and plaster ceilings began to decay in earnest. Makes perfect sense to me. Aaron is going to install the plywood for us, but he has a day job so it’ll get done when he can fit it in.

Before we even start on the ceiling, there’s a lot to be done. Like the walls. I didn’t really think about the walls. On one side there’s painted chipboard paneling, 1960s style. Not entirely sure what’s underneath it, but I hope it’s not smashed up plaster. On the other side, we have three layers of wallpaper and at least two layers of paint, some of which only go partway up the wall. 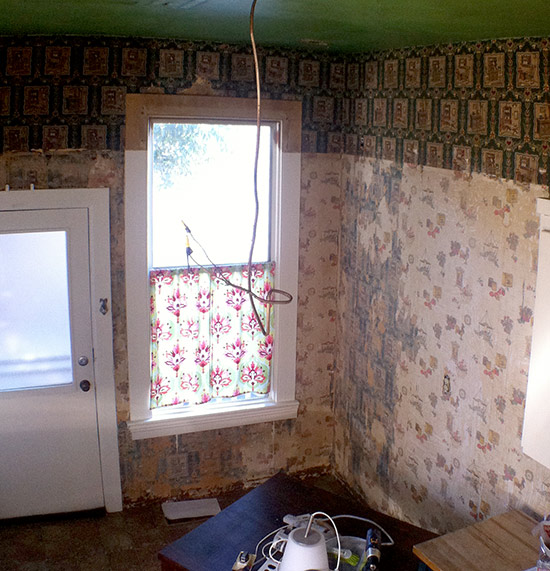 This picture is actually after I pulled the former crown molding off and took with it an entire layer of paper. Thank goodness for that mesh-backed paper from the 70s. This is what that paper looked like, btw (the paint just peeled right off of it):

Underneath that was this (covered in browning glue):

Under that, going all the way up to the old ceiling is this charming print: 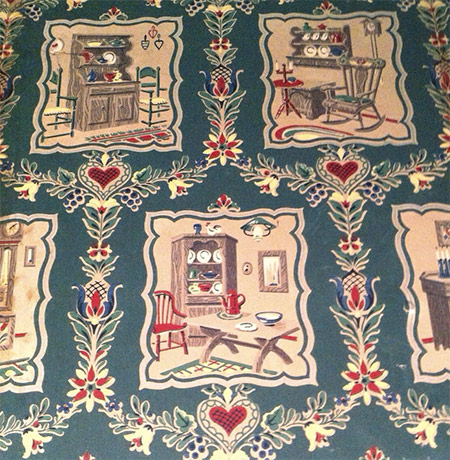 Which has a brown colorway twin in our basement. I thought that would be all, but that paper was peeling a bit above the window and below it and another layer of paint, I found this: 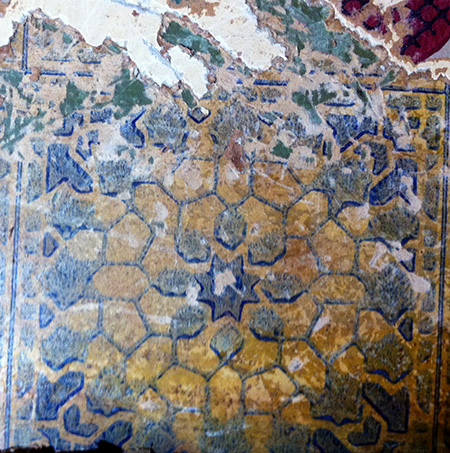 Looks like a moorish mosaic pattern. In blues! Since I was descending well into lead paint territory, I opted to stop there.

As I mentioned, the wall by the laundry and bathroom was covered in paneling that Randall made quick work of removing. Underneath was drywall covered in a textured goldenrod paint, and the wall is in pretty decent condition. I was worried that they chose paneling to cover some massive holes, but I think they just liked the style. If I’m not mistaken, the paneling was originally Pepto Bismol pink. The newly naked wall has a spot full of tack-holes where a calendar used to be, and the silhouette of an awesome deco switch plate, but not the plate itself. 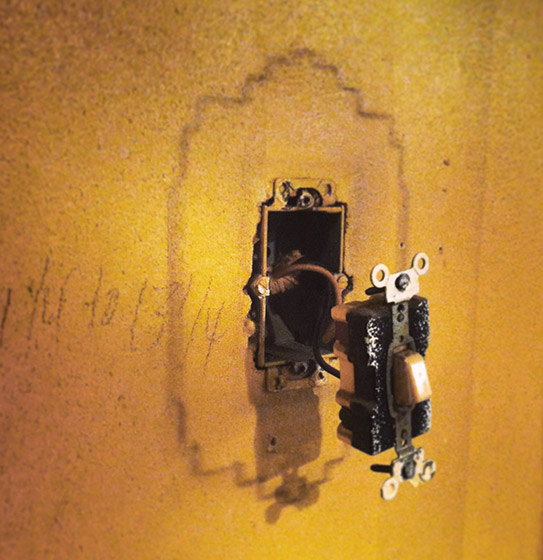 I’ve got a lot of spackling and smoothing to do. The internet tells me that a skim coat of joint compound will probably work for this, but it’ll be my first time working with the stuff. First I need to sand away some of the lumps of wallpaper paste, but I’m not going near that goldenrod wall with the sander. I’m sure everyone’s favorite lead paint is waiting.

Safety first! If  the skim coat doesn’t go well we can always put drywall over it. In the meantime, lots of dust to clean up.