I had many different ideas about a light fixture for the kitchen as you might gather from this pinterest board. If money were no object we probably would have gotten something fancy from Rejuvenation or somewhere, or even have gone decidedly more space age: 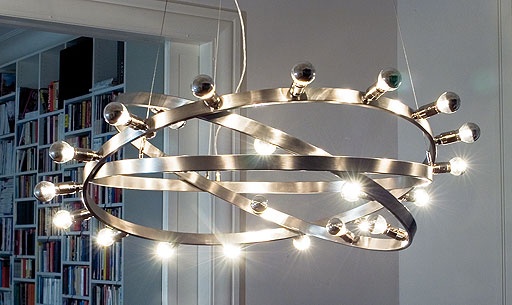 But a combination of budget and my masochistic DIY impulse lead us to something else. I have mixed feelings about what I’m about to say, but it’s the truth. We copied someone else’s design. And not a big corporation’s design, a small shop’s design. I didn’t do it for profit and it’s not exactly the same, but I admit that I don’t feel totally good about it.

We saw a simple but unaffordable chandelier in a local store and I could tell that it was something we could make if we could find the parts. So we did. A little internet research yielded a couple of excellent lamp part suppliers: Grand Brass and Antique Lamp Supply. Between the two of them and several orders (having never built a fixture from scratch we missed a few parts the first time) they had everything we needed. All told it came to a little less than half the cost of the fixture it was modeled on (about $200 vs. $500+).

Even though all the parts are brass we planned on doing a blackened finish so as not to conflict with our crazy silver ceiling. They make blackening solutions for brass, but the parts didn’t all start with the same finish texture and blackening solutions are finicky at best. So I scrubbed them all and bought high-temp outdoor flat spray paint, made for barbeques. I was hoping it would be durable like appliance paint but no such luck. That’s okay though, it’s not like people are going to be touching it.

Once painted, assembly was simply a matter of screwing the parts together and wiring the sockets. It got a few scuffs after assembly so I gave the whole thing another coat of paint. In the meantime our friend and electrician Joel came over and moved some switches and put a new box in the ceiling for the chandelier. He had a giant drill bit that took a core sample out of the ceiling the exact size of the mounting box that he managed to get dead center. That was a great relief because I had been picturing myself on a ladder trying to cut a perfect circle in the metal ceiling  using a sawzall. And while he was there he installed the light too. So here it is.

Simple 4-arm uplight chandelier with sandblasted square shades. Unassuming but bright. No fuss to compete with the ceiling. And of course it features the sigil of our house: Unicorn horn!