I warn you this post is long, but to me it is fascinating. It started with the humble snippet above that came with our escrow paperwork. It was exciting to know that the house was THAT OLD, and that we knew the name of the (probably) original owner. Saloon?! Was our house a saloon? No, it was just the owner’s stated business. I started searching on archive.org and found enough information to get me hooked. Hooked enough to pay for an Ancestry.com membership. There’s a lot of confusing information out there* but these are the things I know for sure:

1870: Frederick Brandt was working for his father, Conrad, a grocer at 417 3rd St, San Francisco (less than a block from where I work now). Seems like a successful working-class family.

1881: Frederick is listed as a grocer living (and working?) at the same address. Probably took over the family business.

1884: Alameda directory listings have no mention of Mr Brandt.

1886: Mr Brandt appears on the voter registration in Alameda, but no street address. There may not have been a house here at that point.

1887: Frederick Brandt now runs the Chicago Beer Hall with John Hencken. I’m guessing Hencken was an uncle or cousin – Brandt’s mother’s maiden name was Hencken. The bar is just down the street from the location of his father’s store.

1889: Check out the directory listing for his residence:

He was here on this spot, but this was before there was even an *address*!  Also for the locals, 9th Street used to be called McPherson. If you’re interested in what Alameda had going for it in 1889, check this out.

1894: Frederick Brandt is arrested for murder.

I’m more or less freaking out at this point and sending instant messages to Randall informing him of my findings.

Randall: you should look up Mahoney
Me: There’s too many of them from that period
Randall: I found it! You are going to lose your $%&@

“ONE SHOT DID IT. An Ex-Convict Slain by a Saloon-Keeper. WANTED HIS DRINKS FREE. The Liquor-Seller Was Once a Policeman. HE IS CHARGED WITH MURDER. Result of a Row in a Third-Street Resort— The Bartender Acted in Self- Defense. Daniel Mahoney, an ex-convict, was shot and killed by ex-Policeman Frederick Brandt at 4:30 o’clock yesterday morning. Brant is proprietor of the Chicago saloon, 154 Third street, a resort that is open day and night…”

The story is on the upper right corner of the page at this link, and it’s worth an old-timey read. Bar brawl! Widower ex-cop! An ear bitten off! WHISKER PULLING!

Turns out that in addition to being a bartender, Brandt was a competition sharp-shooter and ex-militia/police. The article notes his four motherless children were living with their uncle. I’m guessing that during this period he was building the house and looking for a new wife.

1896: First listing of house by address:

1892: Mr Brandt was listed as removed to Oakland. I’m not sure what that means. I looked in the Oakland part of the directory and he’s not there.

1930: Census report for Frederick Brandt at this address. He is 79 years old, retired, and the property is valued at $3,000. That’s the last listing I could find for Mr. Brandt. If this thread refers to the same Frederick Brandt (likely), he died on December 26th, 1930.

1938: We have a new occupant: Charles Erickson, shipwright. Phone: AL-4377-J. I believe he lived here with his wife Henrietta and two children. I’ve been researching this for some time and I just noticed something. Charles Erickson’s wife has the same first name as Frederick Brandt’s daughter!

(a few minutes later): OMG It’s the link! Henrietta A. Erickson was indeed formerly Henrietta A. Brandt! She is listed on her death certificate as born on 7 September, 1884 and deceased on 20 December, 1948. I never would have known about her from looking at Charles’ documents though – see his WW2 draft card: 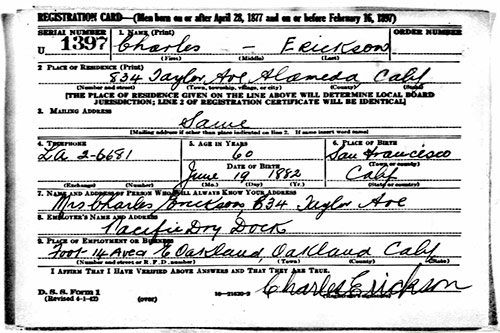 Turns out the kids were married in 1910 and lived a few blocks away on Haight Street. I assume they got the house when Frederick died. I don’t know what happened to Emma.

1944 is the last voter registration for the Ericksons at this address.

That leaves me with 60+ years to account for next time (it may be a while until part 2). The more recent it is, the trickier it gets though. Censuses and other records are closed for privacy reasons, and homes aren’t passed down within families as much. But I have a few clues, and I haven’t even gone to the county office to look up property records yet. Maybe I’ll even find some old photos.

*There was another Frederick Brandt in Alameda during some of this period who was also a saloon owner! Unfortunately he was caught serving alcohol to women and girls (gasp!) and got behind on his bills and subsequently killed himself in 1912. Additionally, one of Frederick’s children was also named Frederick. He died on Mare Island in 1910 a few months after Henrietta’s wedding. And finally there was a Conrad Brandt back east with multiple children and grandchildren named Frederick.