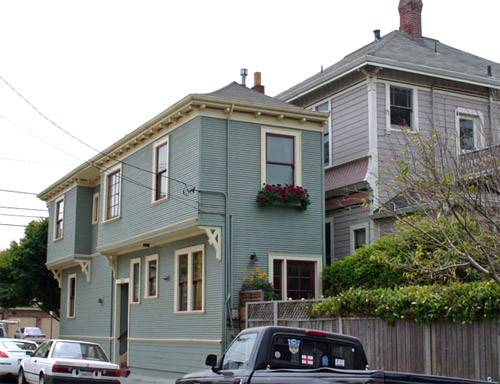 Have you ever seen an unusually narrow house wedged between two others? It’s possible it was a spite house, or at least the oddity that’s become known as a spite house.

Wikipedia defines a spite house as such:

A building constructed or modified to irritate neighbors or other parties with land stakes. Spite houses often serve as obstructions, blocking out light or access to neighboring buildings, or as flamboyant symbols of defiance. Because long-term occupation is at best a secondary consideration, spite houses frequently sport strange and impractical structures.

It turns out there’s a spite house here in Alameda (seen above).

No one seems to have the straight story on the house – According to Zillow, a man sold off a tiny parcel of land adjacent to his house, thinking it was too small to build a home on. However, the buyer turned out to be a carpenter who began building a home on the site. The carpenter finished what would come to be known as the Spite House in 1890. It’s not much wider than a car.

Wikipedia’s version of the story is different. It says that the city took a large chunk of Charles Froling’s land away to create a new street. Froling had inherited the land and planned to build his home on the site. To spite the city and an quarrelsome neighbor, Froling built a house 10 feet wide, 54 feet long and 20 feet high on the tiny plot that was left. 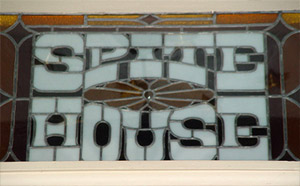 The house fell into disrepair in the 1960s after the elderly owner could no longer care for it, but new owners have brought it back, including installing this excellent transom window over the front door.

There’s quite a few spite houses out there. I sincerely doubt that most of them were built out of spite, but it’s a catchy term. The New York times has a nice feature and slideshow on the Hollensbury Spite House in Virginia. Curbed and CNN spotlight Boston’s Skinny House. Twisted Sifter and Wikipedia round up a number of other spite houses.

I love the idea of a tiny house and building creatively for the space you have, but blocking neighbors’ windows and access not so much.