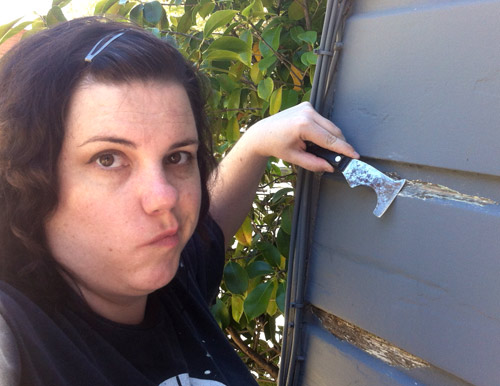 That’s my face after I realized what I got myself into.

You know how we had our house painted six months ago? Well we got the absolute cheapest painters ever, not realizing til afterwards that they didn’t prime the house (we really should have realized for that price). They power washed first and they did a couple of coats, but our little old house needed more. It’s not peeling everywhere, but where it is peeling, it started many layers ago. A little scrape on one of the blisters reveals this: 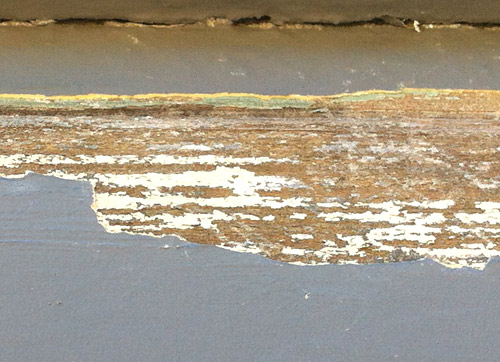 Looks like the bottom coat is white, or primer. I don’t know if that’s the original paint or not, but if I think it is. Over that was two shades of minty green (it was probably that color for the majority of the 20th century) and then a bright yellow. And finally the beige that it was when we bought it.

When you paint the siding on old houses, I believe you’re supposed to leave tiny gaps between the boards for the regular expansion and contraction of the wood. That’s the horizontal line you see near the top of this photo: 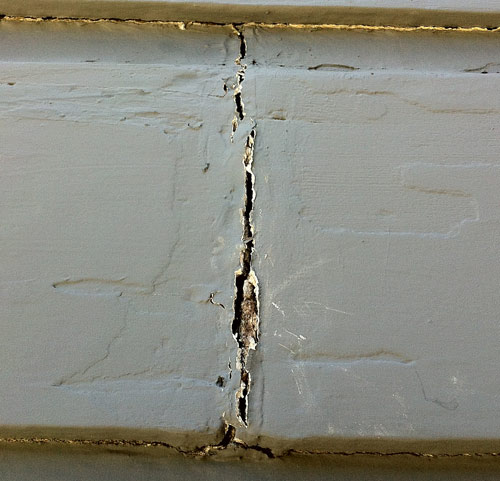 However, you’re not really supposed to have vertical cracks and gaps like this. It’s just the usual heat/cold expansion (it’s much less visible in winter), but I suspect this part of the siding was replaced or repaired with different wood at some point. So we filled the gap and primed and painted over it. I’m not sure what it will look like in winter when the house shrinks again, but it’s protected for now. That’s all you can really do when maintaining old houses: fight entropy. You never really win, but that’s okay. I just don’t want it to rot on my watch, and maybe I can improve it. A little.

Tomorrow I get to do the porch! It’s a glamorous life over here.

The title of this post is a joke. It’s a fake educational film from the Simpsons. No paint was eaten today.