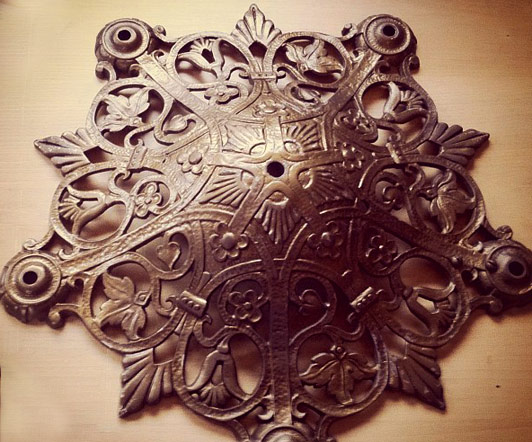 We need a new light in the bedroom. I hate the light in there. The table lamps are fine but I try to never use the overhead light, I dislike it that much. It’s nothing special, just the same style of bedroom light most of us grew up with. I couldn’t get a decent picture of it, but it’s this style:

only not as nice as either of these.

Some background: Randall rewired and I restored an antique chandelier last year. It wasn’t hard to do, and after it was done and hung, I realized I could have done more with it than I did. It’s hard to see subtle detail from that far away. (click here if you want to see the before-restoration version) 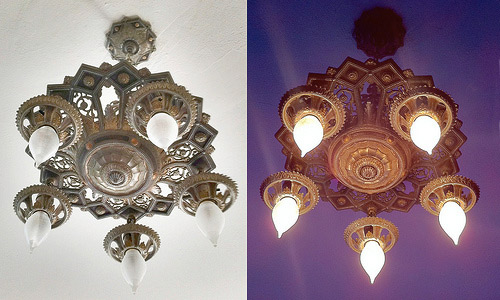 The other thing I realized is that although this 20s-30s style of chandelier is pretty, and plentiful on ebay, it’s a major direct-light offender. Which is fine in the office with some old-style bulbs that are interesting to look at, but not what I want for tranquil bedroom light.

I saw this unusual light on ebay. Kind of like an old theatre lobby light made of bronze (possibly brass) and mica (listed as islinglass). It wasn’t exactly what I wanted, but it was interesting enough that I bid – I figured I could update it. The auction went over what I wanted to pay for it, and that’s okay. But it gave me an idea and I kept looking.

I bid on and won this light instead: 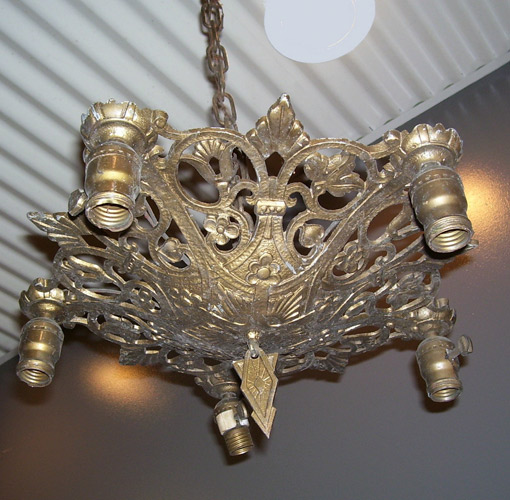 Yes, it’s another one of those same direct-light fixtures, but you can probably see where I’m going with this. It’s getting a revamp. This week I’m going to paint it and get wiring for it and some other supplies I’ll need. I’ll do a whole post on the restoration and explain how (with any luck) I’m going to turn it into a softer uplight fixture  – It’s an experiment!